This message is being written while the last night is coming to the end and, probably, will only be finished when I get home.
We had 10 nights at the IAC80 and this one is the last.
Tomorrow is the trip back home and our flight leaves Los Rodeos, Tenerife North, at 13:20 local time.
As reported before, there are some personal equipments in use and the removal must be done by the competent personnel. We cannot do it.
They will be here tomorrow morning, after 09:00.
We shall meet them to take our belongings, pack them and rush to the airport.
Tonight, our only target will be Delta Scorpii, so that we can sleep for a while.
By the physical limitations of the telescope, the hour limit is 02:18 local time.
We make 3 series of 30 minutes in the helium II line, 30 minutes in the 4500 line and 30 minutes in the Halpha line, plus the correspondent calibration spectra, before and after every capture.
After the end of the captures, we must back up the data and complete all the procedures to park the telescope.
This means that the night today will end by 03:00.
That's what we did. And, by 09:00 the maintenance personnel quickly removed all our equipments.
We left the observatory at 09:40, stopped for a cake and a coffee in La Esperanza and went to the IAC, in La Laguna, to buy some pins, sweatshirts etc.
The flight from Tenerife to Madrid had a delay of almost 01:30 and we managed to catch the flight from Madrid to Lisboa just at the last minute.
After take off from Tenerife I took this photo. 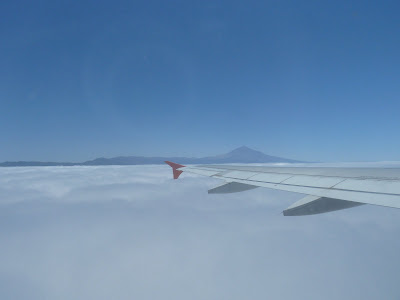 It is a memory of 10 unforgettable nights.

This was the last night with the team complete.
Anatoly Miroshnichenko and Thierry Garrel went home and only Alberto and José Ribeiro still stay for the last night.
This night number 9 was again very good and we managed to complete all the objectives.
First Delta Scorpii in all the domains, the reference star 40 Ophiuchi, 66 Ophiuchi, Gamma Cassiopeiae and 6 Cephei were the objects of the night.
At a certain point, the dome was not synchronized with the telescope and had to be initialized again.
From then on it performed correctly all night.
As I reported earlier, this mission made use of one of our spectroscopes, science camera and personal computers.
To guarantee the success of the mission, in case of a malfunction, there was a spare set of spectroscope, science camera, and personal computers as well.
This photo shows the spectroscope and science camera brought by Thierry, being accommodated for the trip back home. 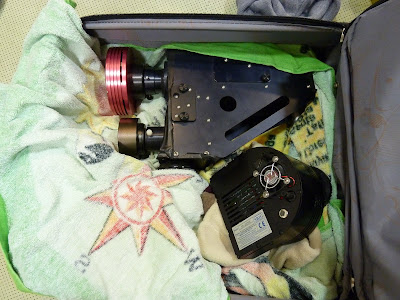 All the data are being analyzed by the PI, Anatoly Miroshnichenko and, in due time, he will present the conclusions.
But there is a conclusion about which it is the time to speak: - This mission had a team at work.
A team is not a group of skilled people put together.
A team is a group of people who are skilled for a particular task and who put their skills at the service of the objectives of that task, in a coordinated way.
There is no team without coordination and cooperation and it is not necessary that every team member is able to perform all the actions required for the success of the task.
A good team work originates synergies that make the abilities of the group be much higher than the sum of individual skills.
This group formed a team.
Each one accomplished his tasks on the right time and in a perfect coordination.
For that reason, 10 nights, or 10 days of 12 hours of work each, elapsed very rapidly and the totality of the objectives were achieved.
It is time now to wait for the results.
This afternoon, me and José Ribeiro took Anatoly to the Tenerife South airport and, on the way, had lunch at Vila Flor, in an open terrace, at a typical restaurant. 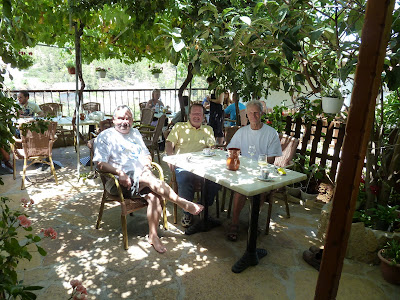 While I write this message, we are making flats and waiting for the astronomical night.
Tomorrow I will make a short report of this last night.

Last night has been again an excellent night.
The targets were, beyond the flats, Delta Scorpii in the domains of this mission, the reference star 40 Ophiuchi, Delta Scorpii again but in Hgamma, 66 Ophiuchi, 6 Cephei and Gamma Cassiopeiae.
The 6 hours of the astronomical night have been fully exploited.
We wake up at 13:00 hours with the intention of taking the cable car to the top of the Teide.
It seems that the winds, at the top, were blowing at 65 km/hour and, consequently, the funicular was stopped.
So we made a short walk in the Cañadas del Teide. 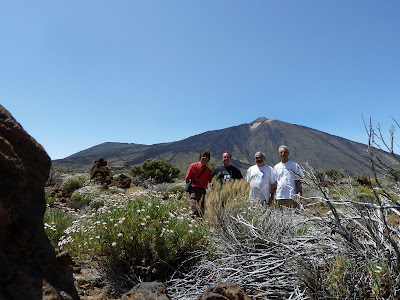 There are a lot of tracks in there, but we do not have the time for long walks.
While the setup was set to capture flats, before the astronomical night arrived for the 9th night, we went to watch the sunset and to have a view of the island of La Palma. 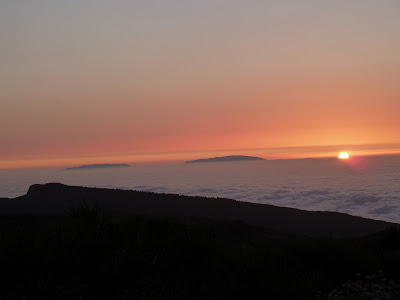 We completed 8 nights out of 10, and, from the point of view of telescope utilization and accomplishment of objectives, we are near the 100% mark.
We would like to take possession of the IAC80. 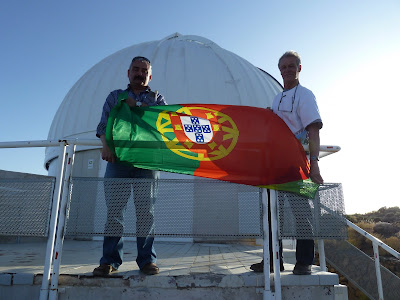 But the IAC probably would not agree.
So we took this photo just for fun.

Last night has been excellent.
The wind remained within the limits all night and there were no technical problems.
Like every other day, so far, we started with the flats and, by 22:40 local time, continued with Delta Scorpii in all the domains reported earlier, with the reference star 40 Ophiuchi, with upsilon Saggitarii, with 66 Ophiuchi, to finish with Gamma Cassiopeiae.
Everything is now running routinely.
The weather conditions have been good and we have been able to complete all the objectives for each night.
There are three nights remaining and we have the hope that our luck continues until the end of the mission.
If the weather depends on mother nature, the adaptation and the performance of the equipments depends on the work of the technical staff.
They did a great job.
I show now some photos taken during the preparations of the set up.

The crew prepares the assembly of the accessories box. 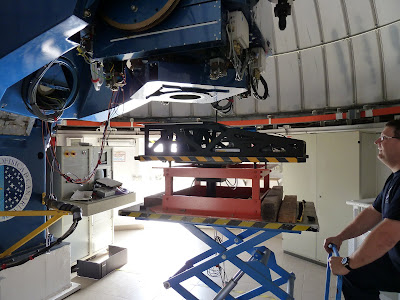 And attaches it to the telescope. 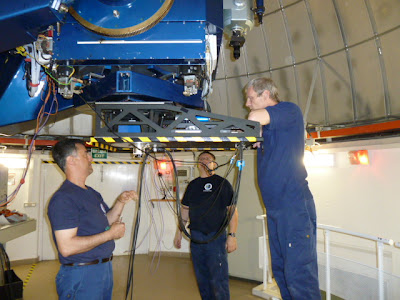 The auto guiding camera, FOVIA, installed in the accessories box. 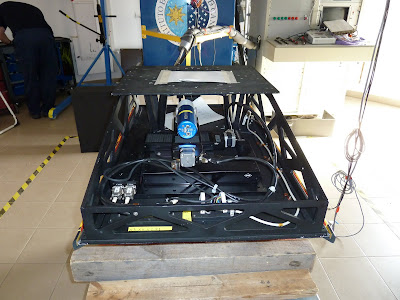 And the spectroscope attached to the accessories box. 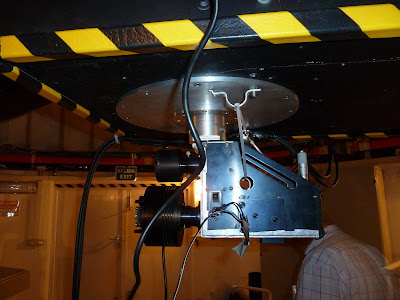 Last night has been the first of the second part of this mission.
All day long there were strong winds, with gusts.
By 18:00 hours we started the capture of flats, awaiting for the astronomical night, what happens by 22:40 local time, 21:40 UTC.
But the wind speed, the average for the last 5 minutes was above 45 km/hour and the maximum, also in the last 5 minutes was above 55 km/hour, and the dome could not be open because the operational limits were exceeded.
Close to midnight the wind speed started to decrease and we were able to initiate the capture of spectra, first of Delta Scorpii, but only in two domains because there was no time for more, then of Chi Ophiuchi, EW Lacertae, 66 Ophiuchi, to end with Gamma Cassiopaiae.
The wind speed went on slowing during the night and at dawn was almost calm.
The night, under the wind was cold outside. So a group of students who were training photometry near the MONS came to visit us and to warm up from the cold. They even managed to go to the dome at a time when we had to close it and make flats. 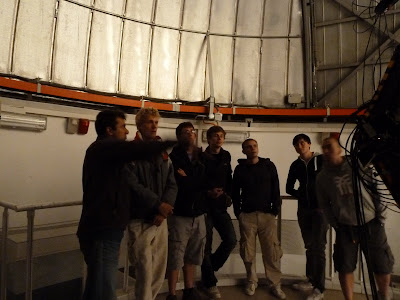 The "calima" disappeared with the variation of the winds and, for the first time, we got a view of the Gran Canaria.
Here it is, with a foreground of flowers and with the dome of the IAC80. 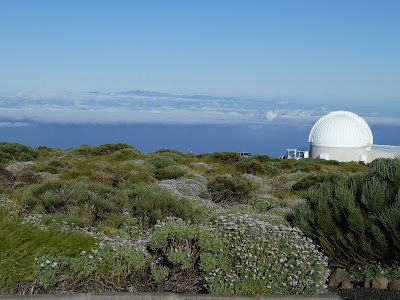 The weather is clear and warm here at the observatory, but, when we went down to La Esperanza, it was cloudy and cold, under a dense layer of clouds.
We don't think that the cloud layer may climb up to the altitude of the observatory and expect to have another excellent night. 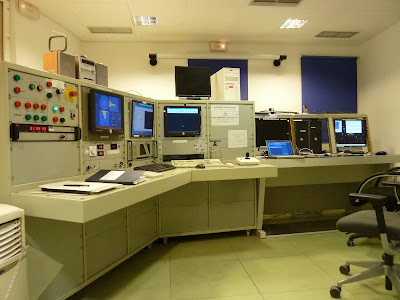 This sequence terminated aproximately 5 minutes before the end of the astronomical night. Then came the final actions:
22- Park the telescope and close the dome, using the procedures established;
23- Backup data;
24- Switch off the science camera and the personal computers at the dome and at the control room;
25- Inspection of the dome, control room and hall to confirm that everything was in place.
At this time it was 06:00 and all of us went to sleep.
In the sunday afternoon, after lunch, we had the oportunity to visit the Solar Laboratory, in the Pyramid, where we shoot a photo side by side with a projection of the Sun. 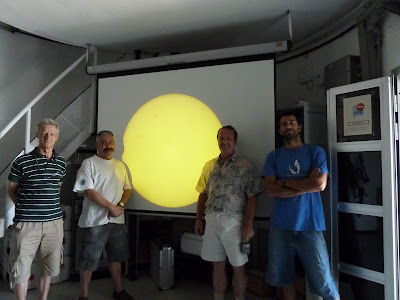 Then we could observe the Sun in Halpha through a dedicated telescope mounted in the open air. 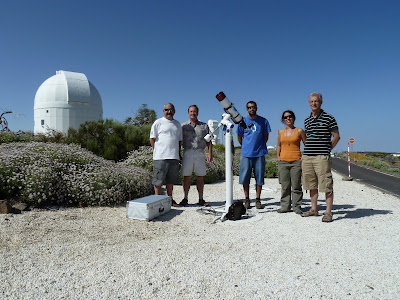 Nights, at this time of the year, are short and elapse very rapidly. So far, we have been lucky with the weather conditions. The major risk comes from possible strong winds, which, at this altitude, is relatively frequent.
Weather conditions seem to be changing and the wind direction is expected to rotate to northwest. The speed may increase.
We hope that it stays in the operational limits.

Last night was an almost perfect night.
The wind speed did not exceed 15 km/hour and we could make the spectra of Delta Scorpii,in Helium II and Halpha, of 66 Ophiuchi, of Pi Aquarii and there were still 40 minutes for MWC342.
The equipment works now correctly. We managed to have the installation of the flats screen and of the Filly calibration lamp corrected.
The IAC80 premises are excellent.
The dome itself could easily accommodate a larger telescope. It is at least as big as the dome of the 1.5 meter telescope, Carlos Sanchez.
The control room accommodates the consoles and computers, two independent computers, a laser printer, a shelf for documentation and still has space for all of us to stay there comfortably. 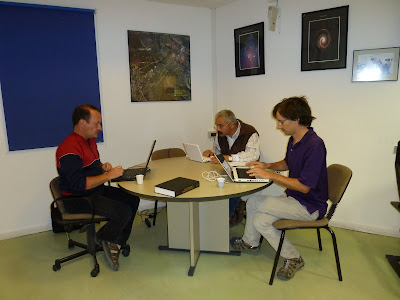 Additionally there is a large working hall with a table, either to have a meal or to work, a TV set and two comfortable sofas.
And there is a kitchen with a small refrigerator.
The landscape is now magnificent, with some typical plants full of flowers.
Here is a view from outside of the Solar Pyramid. 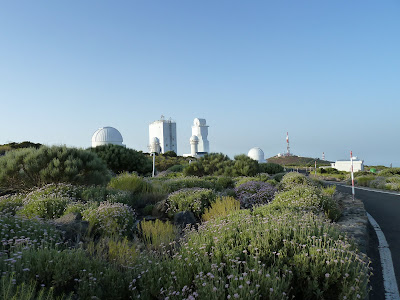 Anatoly is working in the spectra captured so far. He is a hard worker; he does not stop all night long.
As usually the night ended at 06:00 and we went to sleep with the intention of exploring the volcanoes Siete Fuentes and Fasnia, volcanoes that one may see from the observatory and the result of eruptions which occurred in 1704 and 1705. These eruptions are called historic eruptions because there are written reports about them.
Here is Anatoly at the top of one of the volcano walls. 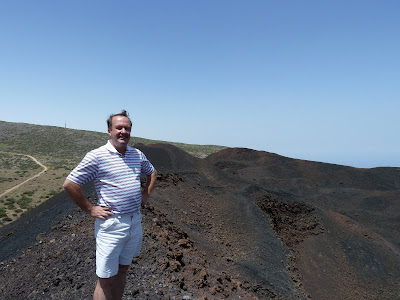 By 18:30 we came back to the IAC80 to start a series of flats.
There is no wind at all but the "calima" is denser than the previous day.
It will not harm our captures because we are working in bright stars and the signal will be strong enough.
Tomorrow there will be a report about tonight.